South East Utah calm water float trips. Only done one of these, the rest just dreamed up from all my hiking and bikepacking trips in the area, and presented here as inspiration and for discussion. I live in Moab and just got a packraft, hence the interest.

1 One way, no bike. Dirty Devil River from Hanksville. Car/bike shuttle. Only high water. Several options for entry/exit. The whole river would be long.

2 Loop with bike. From Dewey Bridge on 128 go up and over Kokopelli's Trail to Utah Bottom. Float Dolores back. Day trip.

3 Out and back with bike. From Dewey Bridge up and over Kokopelli's Trail to Utah Bottom. Cross Dolores to a Dolores Triangle exploration bikepack. Float back from point upstream. Many routes.

4 Loop with bike. From bottom of Onion Creek on 128 go up and over to Gateway via Fisher Mesa. Float all the way back via Dolores to Colorado. Long ride followed by long float. White water options on first stretch of Dolores, can by bypassed on bike.

6 Figure 8 loop, no bike. From Needles hike Big Spring Canyon down as in 5. Float to Spanish Bottom. Go thru Maze, down Water Canyon to Green. Float to Red Lake Canyon exit. Long hike back. Most of the hiking on trails.

7 Out and back with bike. From Mineral Bottom float to Millard, across from Queen Anne Bottom. Ride up and over to Maze, Ernie's, and lots of other option. Multi day, big terrain.

8 Loop with bike. From Mineral Bottom float Green's Stillwater Canyon to Stove Canyon scramble exit. Hike a bike White Crack abandoned mining road to White Rim and back to Mineral. Should go...main features of this route not on map.

10 Loop, no bike. From Beef Basin hike to Imperial Valley down to Colorado. This is a reverse of the Cataract float exit. Float to Gypsum. Hope to find the route up. Rugged.

1 Loop with bike. From Moab ride to Potash then up White Rim and down Lathrop Canyon. Float Colorado to Rustler Canyon scramble exit. Ride back to Moab via Lockhart Basin.

2 Loop with bike. Ride Over Hurrah Pass to Colorado. Float down to Rustler Canyon scramble exit. Back on Lockhart and Hurrah Pass. Shorter, slightly different version of above route.

3 Loop with bike. From Potash float Colorado to Lathrop Canyon, ride back on White Rim.

4 Loop with bike. From 211 near the Needles go on Lockhart Basin road to Lockhart Canyon, float Colorado to Rustler Canyon scramble exit and ride back to 211. Day trip. Good for practice with bike on packraft.

5 Loop with bike. From Moab ride on Lockhart Basin road to Lockhart Canyon. Float Colorado to Lathrop, up to White Rim and ride back to Moab via a number of different routes.
Top

Perfect, now I know who to get a hold of when I need a day trip or two near me.

That's quite the list you have there. I've done alot of trips in those areas and would make the some suggestions.

#4.. You can't get by all the white water on the dolores by using the road on the west side. But yes, most of it I think you might have one minor "rapid". Dolores season is short , get it while you can.

#7+8 Both would be illegal I think since Canyonlands seems to consider a bike on your back a bike none the less. Also the hike from stove pipe to white crack is around 7-8 miles, although it looks shorter on the map. The old road winds around alot. Let me know if you find out about the bike on back details from canyonlands.


#1, 2,+4. Rustler doesn't go to the river, it drains into Indian Creek, Which is a Wilderness study area, no bikes, although on you back should be ok? . But Rustler is the quickest way out once you get to it. There is a video of this loop on the net somewhere, but I cant find it now. Also if you do that route you might want good beta first. There is a triple water fall on Indian creek that is a big obstacle. It stopped the 1859 Macombe expedition.
Top

Took a recon trip down to the Dirty Devil this past Christmas to check out the Angel Pt and Burr Pt trailheads and river access. (My sister in law was driving me nuts!) Hiked both to the river, would make a very nice 3 day trip, ~6hrs hiking (2hrs AP to DD, 3-4hrs DD to BP), ~20 miles paddling, 23 miles car shuttle on good dirt roads. Lots o fun canyons to explore... Planning on last weekend in March if that appeals... http://bioserver.hci.utah.edu/Misc/BCB/ ... ckraft.kmz
Top

Dave, check with me when you are two weeks out on this trip, I want in.
Top

Update to #5 and 6, Big Spring Canyon descent: bring enough rope and gear to do a 40' rappel. Rope also useful for lowering packs at 3 places. 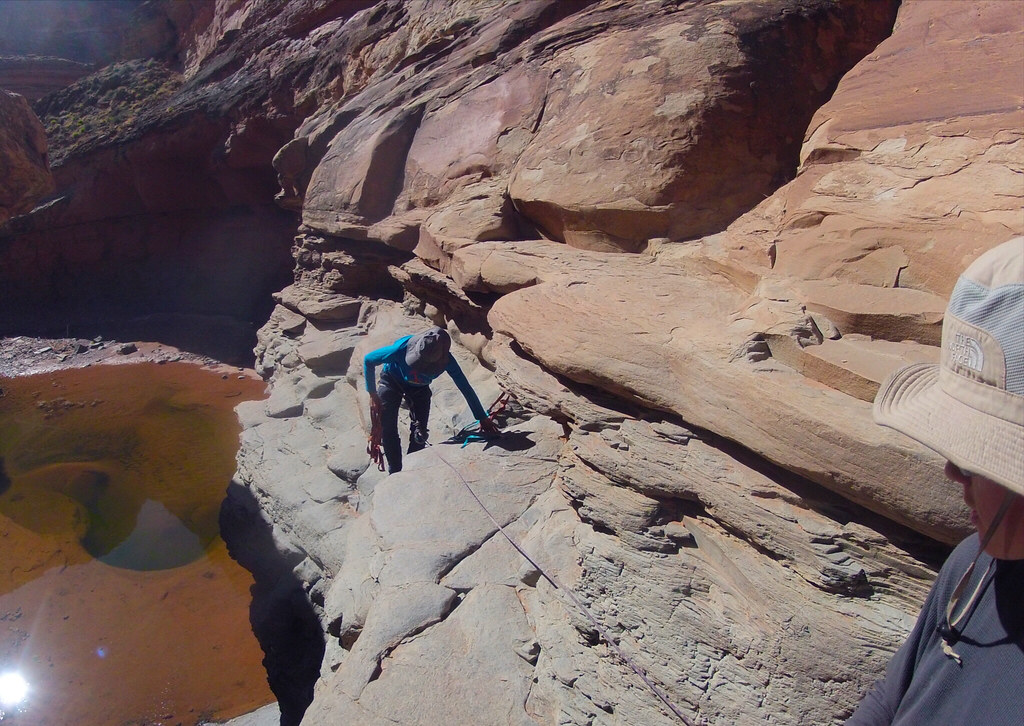